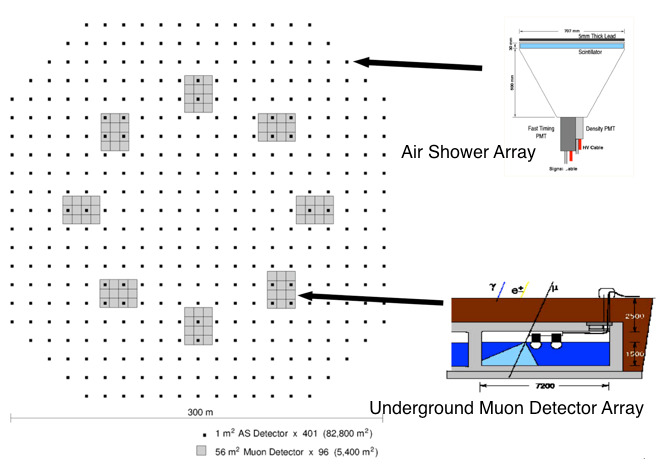 Schematic view of the current design of the whole ALPACA observatory. Gray squares represent the underground muon detector array. Each square is a 56 m2 water-Cerenkov-type particle detector. The array consists of 8 pools, each one of which has 12 detectors.

Image of the water-Cerenkov-type particle detector. The photo shows the inside of a water-Cerenkov-type particle detector of the Tibet ASγ experiment. The detector is a water tank and completely shielded from light during observation. The 20-inch-diameter photomultiplier tubes suspended from the ceiling detect faint Cerenkov light emitted by muons passing though the water. The water tank has an area of 7.2 m x 7.2 m and is filled with water up to a depth of 1.5 m. There is a 2.5 m-thick layer of soil on top of the ceiling.
Image Credit: Institute for Cosmic Ray Research, University of Tokyo